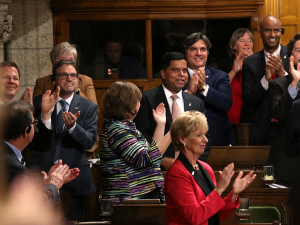 Canadian Tamils are delighted as Canadian Parliament passed motion M-24 recognizing January of each year as “Tamil Heritage Month” with unanimous support from all parties. The motion put forward by Tamil Canadian MP Gary Anandasangaree, Member of Parliament for Scarborough-Rouge Park, was debated on May 20th, and September 29th, 2016 and passed. During both days of the debate, Members of Parliament from all the major political parties spoke in favour of the motion, highlighting the contributions made by the Tamil-Canadian community across Canada.

Tamils began migrating to Ontario as early as the 1940s.  Since that time, Tamil Canadians have overcome tremendous obstacles and have made significant contributions to the growth and prosperity of Ontario.

January is an important month for Tamil Canadians.  The Tamil Harvest Festival, Thai Pongal, as well as other Tamil artistic and cultural events, take place in January.

By proclaiming the month of January as Tamil Heritage Month, the Province of Ontario recognised the valuable contributions that Tamil Canadians have made to Ontario’s social, economic, political and cultural fabric.  Tamil Heritage Month is an opportunity to remember, celebrate and educate future generations about the inspirational role that Tamil Canadians have played and continue to play in communities across Ontario.

The motion recognizes “that, in the opinion of the House, the government should recognize the contributions that Tamil-Canadians have made to Canadian society, the richness of the Tamil language and culture, and the importance of educating and reflecting upon Tamil heritage for future generations by declaring January, every year, Tamil Heritage Month.”

“This is a historical milestone that recognizes the incredible contributions of Tamil-Canadians to our society and the richness of the language, heritage and culture from coast to coast to coast” stated Gary Anandasangaree, Member of Parliament for Scarborough-Rouge Park.

Bill Blair, the Liberal MP from Scarborough-Southwest said. “This, in no small part, speaks to the invaluable contributions the Tamil community continues to make in virtually every sector of our economy, every field of endeavour.”

During his speech, Bob Saroya, Conservative Member of Parliament for Markham-Unionville concluded that this motion “would provide an opportunity to showcase and share the Tamil community’s vibrant culture, traditions, and long-standing history with fellow Canadians.” New Democratic Party Member of Parliament for Vancouver East, Jenny Kwan, said supporting this motion was another step in recognizing “that Canada is strengthened by diversity.”

MP Garnett Genuis said “I congratulate Tamil Canadians and all Canadians for the hard work that they do to preserve and strengthen their cultural identity as part of the Canadian whole.

I note this because the Tamil community is a model of both the unity and the diversity that we aspire to here in Canada as a whole. The Tamil community contains a wide variety of different faith traditions. It includes people whose families hail from India or Sri Lanka or from other places. It includes people who are active in and have made significant contributions to all three of our major political parties and probably other ones.

One of the key ties that unites the Tamil community is the beautiful and historic Tamil language, and I know other members have spoken about that today. Tamil is one of the oldest surviving languages in the world. We know of written inscriptions that date back about 2,500 years. The Tamil language is remarkable for its longevity, but also for its continuity over time. I read recently that around the world there are over 300 daily newspapers published in Tamil. It is an old language but also a language that is very much with us today.

He also acknowledged Tamil Canadians in sports,quoting “ I am always happy to share my knowledge of sports with him. Canadian tennis player, Sonya Jeyaseelan; cricketer, Sanjayan Thuraisingam; ping-pong player, Pradeeban Peter-Paul; and hockey players, Raman and Velan Nandhakumaran have made us all very proud.”

“Passing this motion crossed partisan lines and is a result of the collective advocacy and contributions of many organizations, community leaders and politicians of all stripes and all levels of government throughout the years. It is a testament to our collective and united effort in achieving this important goal” concluded Gary Anandasangaree.

Festivities to celebrate the inaugural Tamil Heritage Month across Canada will commence in January 2017, which coincides with the Canada 150 celebration.